Did you notice the numbers in red? The word "Dinosaur" was created in the year 1841. That is less than 200 years ago. The word was coined by Sir Richard Owen, from Gk. deinos "terrible" + sauros "lizard,". Owen famously credited himself and Georges Cuvier with the discovery of the Iguanodon, completely excluding any credit for the original discoverer of the dinosaur, Gideon Mantell.
So if the term "Dinosaur" is relatively new, was there another term used first? Yes, the term was "Dragon", and here's why...

dragon
early 13c., from O.Fr. dragon, from L. draconem (nom. draco) "serpent, dragon," from Gk. drakon (gen. drakontos) "serpent, seafish," from drak-, strong aorist stem of derkesthai "to see clearly." But perhaps the lit. sense is "the one with the (deadly) glance." The young are dragonets (14c.). Obsolete Dictionary.com Unabridged
"The dragons of legend are strangely like actual creatures that have lived in the past. They are much like the great reptiles [dinosaurs], which inhabited the earth long before man is supposed to have appeared on earth." (Knox Wilson, "Dragon", The World Book Encyclopedia, Vol. 5, 1973, pg. 265.) I don't agree with this timeline, but I agree that our historical imagery of dragons strongly resemble our current image of some types of dinosaurs. 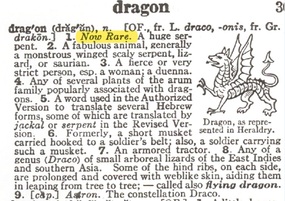 For the sake of this argument, let's say that the term "Dragon" and "Dinosaur" are synonymous. Could find evidence that suggests these creatures were not mythological or prehistoric beings that existed millions of years ago? What if Dragons were merely another variety of animal like a hippo or lion. What if they simply went extinct like the Passenger Pigeon, Dodo birds, or Irish Elk. Could they have existed along side man, and much more recent than most of us realize?

The image to the right is a scan from a 1946 dictionary defining the word Dragon. Notice the text that reads "Now Rare." Wouldn't they have to exist to be considered rare?
Consider the Chinese zodiac that you  may have seen at an oriental restaurant. Each animal represents a month and year combination. The list of animals include: rat, ox, tiger, rabbit, DRAGON, snake, horse, sheep, monkey, rooster, dog and pig. Have you ever wondered why a dragon is alongside common animals we have today? We really have to wonder why they would only add one "imaginary" creature to that list?
As you continue to the next section, please be open minded to the fact that the word "Dinosaur" could be interchanged with "Dragon."
**FAIR USE NOTICE** These Videos May Contain Copyrighted (© ) Material. The Use of Which Has Not Always Been Specifically Authorized by The Copyright Owner. Such Material is Made Available to Advance Understanding of﻿ Ecological, Political, Human Rights, Economic, Democracy, Scientific, Moral, Ethical, Social Justice Issues, Teaching, and Research. It is believed that this Constitutes a ''Fair Use'' of Any Such Copyrighted Material as Provided For in Section 107 of the US Copyright Law. In Accordance With Title - 17 U.S.C. Section 107, This Material is Distributed Without PROFIT to Those Who Have Expressed a Prior General Interest in Receiving Similar Information For Research and Educational Purposes. For More Information: ﻿http://www.law.cornell.edu/uscode﻿
Powered by