Job 41:1-34
1 Canst thou draw out leviathan with an hook? or his tongue with a cord which thou lettest down? 2Canst thou put an hook into his nose? or bore his jaw through with a thorn? 3 Will he make many supplications unto thee? will he speak soft words unto thee? 4 Will he make a covenant with thee? wilt thou take him for a servant for ever? 5 Wilt thou play with him as with a bird? or wilt thou bind him for thy maidens? 6 Shall the companions make a banquet of him? shall they part him among the merchants? 7 Canst thou fill his skin with barbed irons? or his head with fish spears? 8 Lay thine hand upon him, remember the battle, do no more. 9 Behold, the hope of him is in vain: shall not one be cast down even at the sight of him? 10 None is so fierce that dare stir him up: who then is able to stand before me? 11 Who hath prevented me, that I should repay him? whatsoever is under the whole heaven is mine. 12 I will not conceal his parts, nor his power, nor his comely proportion. 13 Who can discover the face of his garment? or who can come to him with his double bridle? 14 Who can open the doors of his face? his teeth are terrible round about. 15 His scales are his pride, shut up together as with a close seal. 16 One is so near to another, that no air can come between them. 17 They are joined one to another, they stick together, that they cannot be sundered. 18 By his neesings a light doth shine, and his eyes are like the eyelids of the morning. 19 Out of his mouth go burning lamps, and sparks of fire leap out. 20 Out of his nostrils goeth smoke, as out of a seething pot or caldron. 21 His breath kindleth coals, and a flame goeth out of his mouth. 22 In his neck remaineth strength, and sorrow is turned into joy before him. 23 The flakes of his flesh are joined together: they are firm in themselves; they cannot be moved. 24 His heart is as firm as a stone; yea, as hard as a piece of the nether millstone. 25 When he raiseth up himself, the mighty are afraid: by reason of breakings they purify themselves. 26 The sword of him that layeth at him cannot hold: the spear, the dart, nor the habergeon. 27 He esteemeth iron as straw, and brass as rotten wood. 28 The arrow cannot make him flee: slingstones are turned with him into stubble. 29 Darts are counted as stubble: he laugheth at the shaking of a spear. 30 Sharp stones are under him: he spreadeth sharp pointed things upon the mire. 31 He maketh the deep to boil like a pot: he maketh the sea like a pot of ointment. 32 He maketh a path to shine after him; one would think the deep to be hoary. 33 Upon earth there is not his like, who is made without fear. 34 He beholdeth all high things: he is a king over all the children of pride. 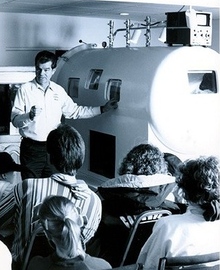 If you examine the timeline of mankind from the beginning of Genesis to a time after the flood, you will see that the average lifespan of man starts at about 850 total years, then it decreases dramatically after the flood. The Bible tells us that the world was different before the flood, and that leads to many theories about the conditions and atmosphere of Earth. The Bible tells us that it never rained before the flood. In fact, most believe that there was a type of green house effect that unrestrainedly supported life. Genesis 6:4 Tell us, "There were giants in the earth in those days". This Giantism occurs in many types of animals and plants which can be observed in the fossil record.

According to the Encyclopaedia Britannica CD (2005) "The significant difference between growth in reptiles and that in mammals is that a reptile has the potential of growing throughout its life, whereas a mammal reaches a terminal size and grows no more, even though it may subsequently live many years in ideal conditions."

If you consider that some turtles today live to be 200, if the same turtle could have lived before the flood to be 1,700 years old, they would have been about 40 feet in diameter. This could explain the massive size of some dinosaur fossils, even though the average dinosaur size was comparable to a car.

An experiment was done to try to replicate this theorized perfect environment. Director of the Creation Evidence Museum in Glen Rose, Texas, Dr. Carl Baugh has invented and patented a 'Hyperbaric Biosphere' chamber to test Biblical claims regarding pre-flood atmosphere and magnetic conditions based on Genesis. The experiment was very successful in it's attempts. The results were as follows:

• Extended life span of drosophila fruit flies up to three generations.
• Molecular change of venom in copperhead snakes to a non-toxic state.
• Accelerated growth of piranha fish - from 2" to 16" over a 2.5 years period.

You may read about the experiment here.

Without getting into all the math, the 16,000-plus animals would have occupied much less than half the space in the Ark (even allowing them some moving-around space)."

Curious why human fossils are not found in the same layers as Dinosaurs? Answers In Genesis explains why HERE.

According to the University of Utah Health Sciences, "Genetic variation is useful because it helps populations change over time.....This process of natural selection can lead to significant changes in the appearance, behavior." They also say, "Radiation, chemicals, byproducts of cellular metabolism, free radicals, ultraviolet rays from the sun—these agents damage thousands of nucleotides in each of our cells every day. They affect the nucleotides themselves...knocking a base off its backbone, or even causing a break in the DNA strand.
Evolution says that men wouldn't even know what Dinosaurs looked like before 1841. If Dinosaurs and mankind really existed in the same time frame, wouldn't there be some visual evidence to support this claim?  In the next section, we will look a look at some visual evidence.
**FAIR USE NOTICE** These Videos May Contain Copyrighted (© ) Material. The Use of Which Has Not Always Been Specifically Authorized by The Copyright Owner. Such Material is Made Available to Advance Understanding of﻿ Ecological, Political, Human Rights, Economic, Democracy, Scientific, Moral, Ethical, Social Justice Issues, Teaching, and Research. It is believed that this Constitutes a ''Fair Use'' of Any Such Copyrighted Material as Provided For in Section 107 of the US Copyright Law. In Accordance With Title - 17 U.S.C. Section 107, This Material is Distributed Without PROFIT to Those Who Have Expressed a Prior General Interest in Receiving Similar Information For Research and Educational Purposes. For More Information: ﻿http://www.law.cornell.edu/uscode﻿
Powered by