As we all have observed, scientific theories grow and change over time. It seems like scientists change their mind weekly about health issues and the origins of life. It was once considered "fact" that the earth was flat. For a time, mankind also believed the Ptolemaic theory that stated all celestial objects orbited the Earth. Even a few hundred years ago the majority thought that blood contained illness and disease, so they would draw blood from their body with a process called Bloodletting, which hastened the death of US President George Washington. For about 2,000 years the majority thought that heavy objects fell at a faster rate than light objects. Galileo later proved that both objects fall at the same rate of terminal velocity.

These are obviously extreme examples, but the point I would like to make is that theories we once learned as "fact" are often considered to be incomplete or even false data a few years later. It's no surprise while technology advances, previous theories are modified. Click here for a list of more examples. 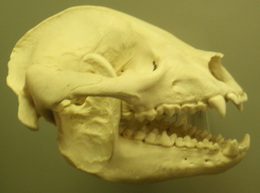 Genesis 1:29 And God said, Behold, I have given you every herb bearing seed, which is upon the face of all the earth, and every tree, in the which is the fruit of a tree yielding seed; to you it shall be for meat.

From this scripture, it seems apparent that all creatures started out as herbivores, but does this make sense with current scientific theory about teeth? Scientists say that if an animal has sharp teeth, it must be a carnivore or at least an omnivore. Take a look at the image of the skull on the left. This animal has very sharp teeth that seem perfectly fit for a meat-eating carnivore. In truth, the skull belongs to a Great Panda, and according to the Smithsonian National Zoological Park, it's considered to be 99% herbivore. They don't say 100% because they assume that the Panda occasionally eats insects hiding among the plant-life.

Interestingly, fossilized Tyrannosaurus teeth have been found with chlorophyll stains on them. According to www.sciencedaily.com, "Chlorophyll is a green photosynthetic pigment found in plants, algae, and cyanobacteria."

In 1990, a skeleton of a T-Rex was found in South Dakota. This skeleton was more complete than anything previously found, though it was only about 80% complete. In fact, this skeleton proved that all other T-Rex skeletons were missing about half their bones. Peter Dodson of the University of Pennsylvania reported that almost half (45.3%) of all dinosaur genera are based on a single specimen, and 74% are represented by five specimens or less. This tells us that we still have a lot to learn about these animals.

Some of the most famous dinosaurs are based on a fraction of what they were originally. For example, the 120-foot-long Argentinosaurus replica (housed in the Fernbank Museum of Natural History in Atlanta, Georgia) is based on only 10 percent of its remains (a dozen backbone vertebrae, a few limb bones and part of the hips) [Meyer, 2002]. That leaves a lot to be assumed!

We need to be careful not to teach fragmented theory as fact. The scientific community has an awful history of misrepresenting their ideas as fact. We should call it what it is....a theory.

What fossilization exactly? To put it simply, it's when an organism is buried in mud or submerged in a mineral solution which protects it from scavengers and rapid decay. Certain minerals in the water and mud fill in the pores of the bone. The organic material is then replaced by minerals causing the organic material to become a fossil. 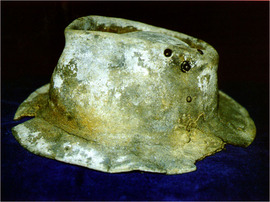 The image to the right is a miner’s hat found in a mine in Tasmania. According to DiscoverCreation.org,  "The hat was made from felt which is made from wool. Wool is not made of cells, but proteins. The felt has many pores which were impregnated by calcium carbonate rich water. This processes is also called calcification. Since it is an organic substance, the hat can decay leaving the calcium carbonate. This process happened in about fifty years." The hat is now on display in a mining museum on Tasmania's west coast.

Isn't it a ridiculous notion to assume everything has stayed the same if Evolution itself is based on changes over time?

Most evolution-based scientists rely heavy on carbon dating to determine when Dinosaurs roamed the earth. The problem is, carbon dating can be inconsistent, incorrect, and requires too many assumptions. The videos below explain why:
www.christiananswers.net explains how the Genesis flood could upset the carbon balance and bury large amounts of carbon which became coal, oil etc. Take a look here.

If you carbon date a rock that is as old as the Earth, the carbon dating result  would be based on earth's current conditions. If the environment or atmosphere on Earth has dramatically changed, the isotope decay rate could be a variable. Therefore, your results would be wrong. This process of using minimal measurements to estimate a linear rate is called "Estimated Linear Math". For example, if you measured your height at both age fifteen (72.5") and twenty (74.9"), Estimated Linear Math would tell you that you were born 65". At the average height of a newborn (20") you would be -91.5 years old. See The Graph.

There is another dating technique that has produced incorrect results called rubidium-strontium isochron dating. "Geologist Dr. Steve Austin sampled basalt from the base of the Grand Canyon strata and from the lava that spilled over the edge of the canyon. By evolutionary reckoning, the latter should be a billion years younger than the basalt on the bottom. Standard laboratories analyzed the isotopes. The rubidium-strontium isochron technique suggested that the recent lava flow was 270 million years older than the basalts beneath the Grand Canyon—an impossibility." To simplify this information, evolutionists say that the bottom of the Grand Canyon is much older than the top, but this test gave results saying the opposite. On the same page, they give this example: "In Australia, some wood found the Tertiary basalt was clearly buried in the lava flow that formed the basalt, as can be seen from the charring. The wood was “dated” by radiocarbon (14C) analysis at about 45,000 years old, but the basalt was “dated” by potassium-argon method at 45 million years old!"

"It may come as a shock to some, but fewer than 50 percent of the radiocarbon dates from geological and archaeological samples in northeastern North America have been adopted as 'acceptable' by investigators."--*J. Ogden III, "The Use and Abuse of Radiocarbon," in Annals of the New York Academy of Science, Vol. 288, 1977, pp. 167-173.
The following images display some outrageous results from carbon dating. If we know for certain the age of what we date, we can confirm if the method is accurate. If we have no way to know cross reference of the age, how are we to know for sure? This reveals a critical error in the carbon dating method since most of what we test we cannot confirm. So why do we rely so heavy on a process that has obvious flaws? 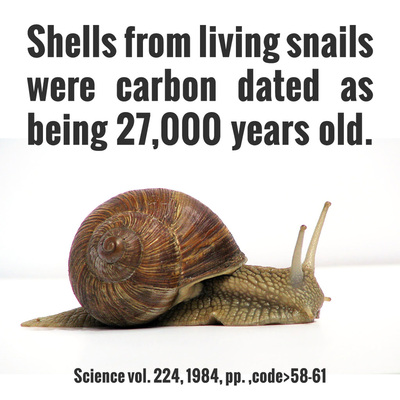 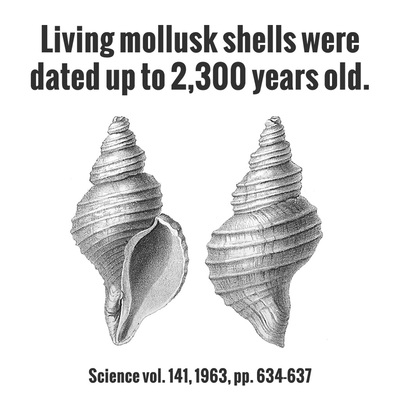 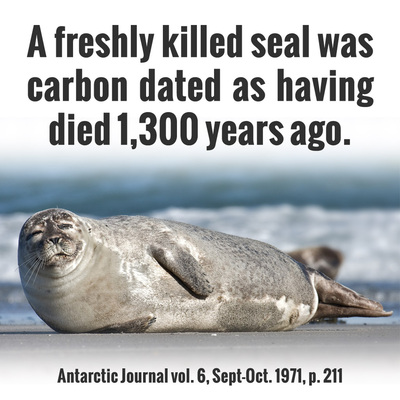 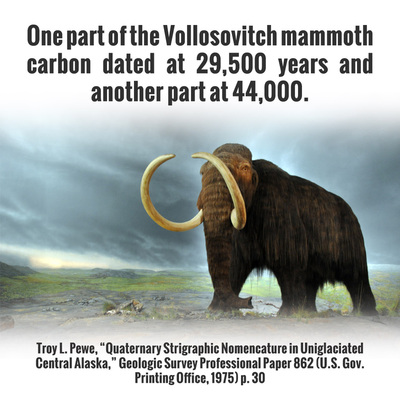 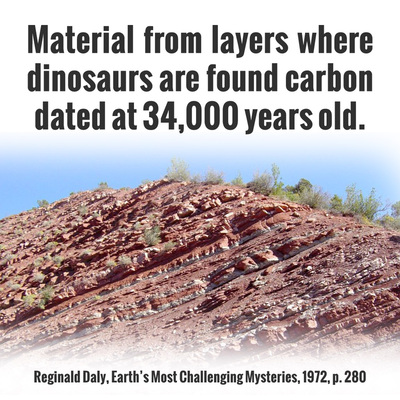 Age Of The Earth

Another reason rock layer dating is inaccurate is the discovery of Polystrate Fossils that are buried vertically, making the bottom of the organism much "older" than the top of the organism. Clearly, that is not correct.

There have been many examples of animals that were thought to be extinct, yet were discovered in modern day. In fact, the Horseshoe Crab is an ancient fish believe to gone extinct about 65 million years ago. Today we find them to exactly match their fossil record. In fact, they have not "evolved" at all.

Wollemia, otherwise known as Dinosaur Trees, are a genus of coniferous tree in the family Araucariaceae. Wollemia was only known through fossil records until the Australian species Wollemia nobilis was discovered in 1994 in a temperate rainforest wilderness area of the Wollemi National Park in New South Wales, in a remote series of narrow, steep-sided sandstone gorges 150 kilometers north-west of Sydney.

Dinosaur soft tissue has been reported in the journals Nature, Science, PNAS, PLoS One, Proceedings of the Royal Society, Bone, the Journal of Vertebrate Paleontology, and others.
The videos above show how in 2005, Mary H. Schweitzer found soft tissue in a T-Rex bone discovered in Montana. Wouldn't this be impossible for a 65 million year old animal? In 2009, Schweitzer and colleagues even found a second specimen. This time they found a duck-billed dinosaur from the Judith River Formation below the Hell Creek. A find like this was expected to be 80 million years old.

This discovery only makes sense if the bones were buried only a few thousand years ago. If Dinosaurs existed at that time, does the Bible give us any clues about their existence?
**FAIR USE NOTICE** These Videos May Contain Copyrighted (© ) Material. The Use of Which Has Not Always Been Specifically Authorized by The Copyright Owner. Such Material is Made Available to Advance Understanding of﻿ Ecological, Political, Human Rights, Economic, Democracy, Scientific, Moral, Ethical, Social Justice Issues, Teaching, and Research. It is believed that this Constitutes a ''Fair Use'' of Any Such Copyrighted Material as Provided For in Section 107 of the US Copyright Law. In Accordance With Title - 17 U.S.C. Section 107, This Material is Distributed Without PROFIT to Those Who Have Expressed a Prior General Interest in Receiving Similar Information For Research and Educational Purposes. For More Information: ﻿http://www.law.cornell.edu/uscode﻿
Powered by